After college at the University of Redlands and Boston University, Greg served for 20 years as a bassoonist in Air Force Bands at the Air Force Academy and in Washington D.C. While living in Virginia, a dear friend introduced him to the hammered dulcimer, and he immediately fell in love with it. (Maybe there’s something about playing obscure instruments that attracts him. The neighbors are hoping the sackbutt or the serpent horn aren’t next.) Now he regularly performs around Colorado on both bassoon and hammered dulcimer, and occasionally dabbles with recorders, bari sax, and bass clarinet. He is principal El Supremo First Chair (well . . . he's last chair also) bassoon and dulcimer in our folk band Crystal Creek.

"Solos by . . . oboist Nancy Brown stood out like jewels. . . Brown's oboe was prominent and outstanding among the other fine solo lines . . . a lone, dreamy oboe line, played with great skill by Nancy Brown . . . Nancy Brown deserves mention for a delicious oboe solo . . ." Those were comments by Washington Post reviewers during Nancy's eight-year tenure as principal oboist of the Arlington Symphony in northern Virginia. Nowadays, you can regularly hear Nancy performing with the Colorado Springs Philharmonic and other groups around Colorado. She maintains a large teaching studio, and many of her students fill Colorado All-State groups , win competitions, and have gone on to professional music careers. She plays oboe, english horn, and various recorders with Greg in our folk band Crystal Creek.

Some decades ago at summer music camp, Greg, a young teen bassoonist borrowed a screwdriver from Nancy, a young teen oboist. A few years later, when they happened to attend the same college in California to major in music, the writing was on the wall, and they fell in love and got married. You could say it was love at first tool. Years of blissful oboe/bassoon duets followed in various parts of the country, and they eventually settled in Colorado Springs. There, youngest son Zach formed an indie folk band called Smith House. And forty five years after that first borrowed screwdriver, during one magical afternoon on a rooftop video shoot, a fiddle player named Brittany Ware joined Smith House to record some tracks. You could say it was love at first take, with the same result – Zach and Brittany fell in love and got married.

Crystal Creek is the intertwining of 2 generations of musicians and 2 musical families. Greg and Nancy bring their years of professional performing in classical and folk genres, with Brittany bringing her family's Celtic music-making plus her classical violin training. Zach brings his amazing voice and intuitive rhythmic drive on the bouzouki and hand drums. Those musical gifts, influences, genres and abilities combine to give you the listener an immersion in a unique musical experience: Is Crystal Creek a Celtic chamber ensemble playing Renaissance music with a world beat, or is it an old-timey folk band playing fiddle tunes with a chamber music sensibility? Listeners regularly use words like “healing,” “joyful” and “uplifting” to describe our concerts. That makes us pretty happy, because that's what Crystal Creek is for us!

Want to know about our concerts and recordings? 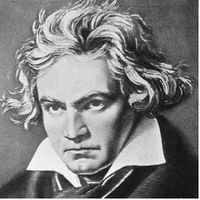 Greg will be performing the Beethoven Septet and the virtuosic Crusell Trio (for clarinet, horn, and bassoon) with fellow artists from the Front Range Chamber Players. He is excited and grateful to be performing two major works he has not played before, with members of the Colorado Symphony. 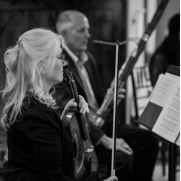 A highlight of inspiration, rejuvenation, growth, meeting old friends and making new ones, and always joyous music-making. We don't yet know specifically what we're doing at the conference, but we're going out on a limb and assuming that it will be something magical. In the past we have performed Gabriel's Oboe, trio sonatas, a series of Sanctus movements arranged for our unique instrumentation, accompanied singers and the choir. We'll see what surprises this year's conference has in store! Tickets usually sell out long in advance! 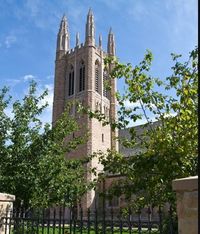 Concerts@Lunch at Grace and St. Stephen's take place once a month on Thursdays at 12 pm, with programs lasting around 40 minutes. Featuring a wide array of local performers, these concerts promote the art of music in our community.

Admission is free, and all are welcome. Concertgoers are encouraged to bring a sack lunch to enjoy during the performance.